Here’s where things begin picking up.

EVERYTHING IS NOT OKAY

When I left you last, Steve was heading out the door to his interview in NYC and I was panicking over the prospect of a mysterious unplanned pregnancy. “If nothing happens before you get back from New York, I swear I’m doing a test,” I told Steve as he was packing. He reassured me that I was often behind schedule, like a United Airlines flight waiting to leave O’Hare or something.

“You’re not pregnant,” he said.

I wasn’t convinced. And with Steve absent, I had no one at home to catch all what-ifs I spewed across the room. Thank God for friends in faraway time zones. Thank God for Messenger.

I was alone and I needed a sounding board—FAST. I hopped online and contacted some special ladies from the Scotland years. This photo captured us after sipping tea and noshing dainty tea sandwiches at the Old Course in St Andrews. Today we’re spread around the globe.

This was met with the same enthusiasm common among Beiber-loving preteens.

“Seriously, you guys!!!! I’m worried!! We would be the 2% of pregnancies the condom companies are obligated to warn people about! What if I’m REALLY pregnant?! We cannot handle one more variable in this complex equation! And how would we afford to raise three kids in New York?!”

Beiber enthusiasm ensued. And then they talked me off the ledge a bit and promised to pray for me. They reminded me of God’s faithfulness to provide and told me everything was going to be okay.

Two days later, everything was not okay. 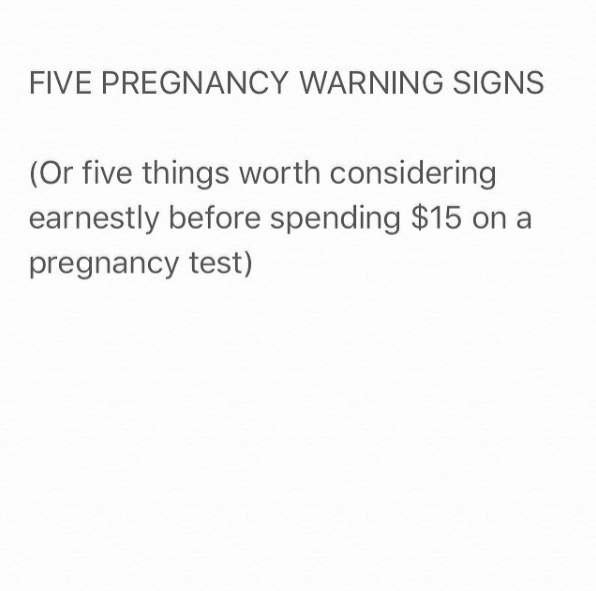 1. When was the last time you sobbed after reading Humans of New York on Instagram?
2. How often does a Pixar trailer make you weep?
3. Does a bag of ketchup chips last longer than four hours?
4. Does your pre-baby pretty bra fit properly?
5. Are you daydreaming in chocolate?
6. Is your bladder the size of a gourmet jelly bean? –

This is a suspicious list of clues I chose to ignore. Lesson? Save money next time. Invest in ketchup chips instead.

One thought on “one more watts: chapter four”